Before dropping the script to the chart:

After you dropped the script to the chart, you have to fill inputs similar to this (a particular builder inputs differ in parameters specific for their construction). 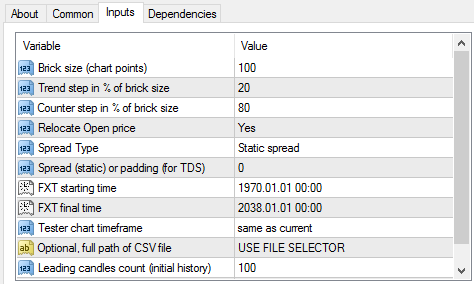 Note: The parameter units (points) and many additional data are determined from the chart, which the script is running on. It saves the user many additional symbol-specific parameters for the Strategy Tester, but the script must run on a chart with the proper symbol. The script warns the user if the file name does not contain the symbol of the current chart.

The inputs start with one or multiple chart parameters, like the bar range, or the brick size. They depend on the chart type and have similar or identical meaning like in their live chart counterparts.

Spread Type – always use Static unless you have the TDS launcher installed.

Spread – distance between Ask and Bid for static spread. The parameter unit (point) is determined from the current chart rather than the input file.
Set this parameter properly, even if you think it does nothing. It affects the bid price offset – adding 2-pip spread moves the bid by 1 pip down and the Renko candles may draw differently. For the static spread, the FXT builder calculates mean of Bid and Ask, and adds the spread in a symmetrical way around that mean.
In case of selecting the TDS variable spread, this number adds padding to the (Dukascopy) spread. The padding is required for most brokers, as Dukascopy spread is rather tiny and does not contain commission fe

Tester Chart Timeframe – by default, the script takes over the symbol and timeframe of the current chart for the tester file. This input can change the timeframe from the default. You may generate multiple FXT/HST files for a single instrument, one for each timeframe, M1 through to D1.

Leading candles count – this parameter must ensure, that all calculations used in the EA have enough initial data. E.g. when the EA uses a 500-candle moving average, then the starting candle count must not drop below 501.
In the test report, the leading count is visualized as a data blok in front of the tick data:

Do not skip this information, it describes a somewhat tricky part.

The static spread is the default behaviour of the Strategy Tester. You do not need to deploy any additional tool for performing tests with the static spread.

But… Unfortunately, the MT4 keeps changing the tester behaviour. So different builds require different treatment for the initial spread settings before the test.

Note: The description below describes TDS launcher in version 1. The later versions were not tested and may not be compatible.

The variable spread is an option available in TDS. The TDS launcher is a commercial (and well documented) application, which start and patches the MT4 Terminal executable when launched. What is its purpose in short?

The FXT Builder has option to add the variable spread data for the TDS tool (if selected in the inputs).

Please read the TDS documentation for detailed information. I am not connected to this product, so I cannot take any responsibility for the TDS compatibility and behaviour.

And finally, a short experience when using TDS launcher. Some EAs may give different results when started by the TDS launcher in comparison to the pure MT4 test (with the same static spread). No idea what the reason is, but I would recommend to run a short-period test in both modes on an identical data file (i.e. with and without the TDS launcher) to ensure the results are identical.

For the Strategy Quant users the import of the generated chart can be achieved. You have 2 options to select from.

After the FXT Builder finishes the build and still displays the final GUI screen, hit the Preview button.
The offline chart opens.

With that chart on top, select the menu ‘File->Save As’, or simply hit the ‘ctrl+S’ key.

Rename the file to what is convenient for you (e.g. EURUSD_100_renko.csv) and save it to your SQ import folder.

In case your FXT Builder has already gone, you may restart the MT4 terminal to the offline testing mode, using the RestartToTest script.
In the offline test mode select the symbol and timeframe of the chart, which the FXT Builder generated (usually the one it was running on).
With that chart on top, select the menu ‘File->Save As’, or simply hit the ‘ctrl+S’ key.
Rename the file to what is convenient for you (e.g. EURUSD_100_renko.csv) and save it to your Strategy Quant import folder.

After you saved the chart into the CSV file, you may proceed to Importing the data file to StrategyQuant.

The FXT Builder needs a single CSV-formatted file to read the tick data from. There are several tick data suppliers. (If  you find another tick archive, send a short file fragment to include the format to the FXT Builder).

For all the above providers, decompress the files after download and concatenate them into a single file. You may use the OvoMerge!TickFile script for a safe concatenation. The tick file may be any length (i.e. larger than 4GB).

Tick data in hourly files is compressed by uncommon method. Currently there are two vendors with very handy tools, supporting the download, decompression and concatenation of the (Dukascopy) historical tick data; the Tickstory and SQ Downloader. You may use either of them.

When using the Tickstory, select export to a tick file in a generic format (no MT4 files):

Once the generator finishes the its run, there are 3 new files created.

The graphical interface displays the final look. Besides information about the finished job, there are a few buttons to select the next action.

You may find annoying to re-export the decade-long tick data file every time you need to append a few fresh days.

For making the life easier, you may export only the incremental data and append it to your tick file with a help of the free script Merge!TickFile

Explanation of FXT And HST Charts in the Fxt Builer

The artificial offline charts differ from time charts in some aspects: